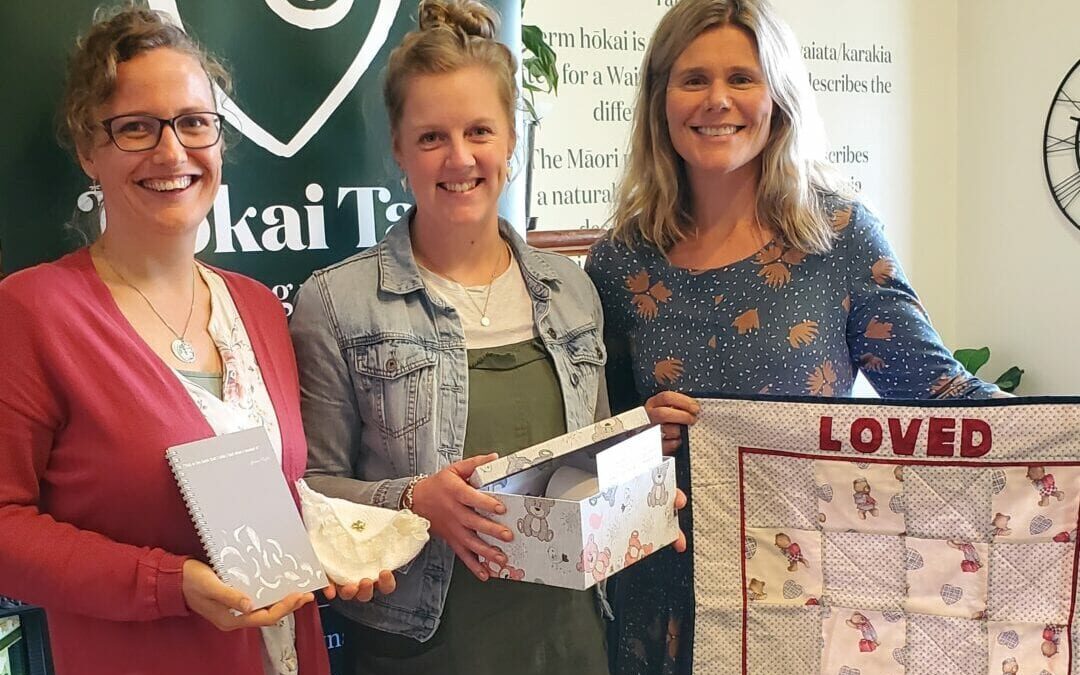 Written by Erin Kavanagh-Hall for the Wairarapa Midweek.

A Wairarapa support service is reaching out to whanau mourning the lives that barely had a chance to begin – reminding them that their child, and their loss, matters.

To support parents experiencing the loss of a baby, whether through miscarriage or still birth, Hokai Tahi is assembling baby loss care packs to distribute to maternity services and funeral homes throughout the region.

The care packages, made possible with community donations, are filled with “thoughtful items”, intended to nurture parents in their grief, and acknowledge their longed for children.

The baby loss care packs were the brainchild of Hokai Tahi’s assistant support co-ordinator Emma Stuart – who felt deeply for families who, after the loss of a baby, had been discharged from health services without follow-up care.

The packs, Stuart said, were a way to show families compassion and comfort while “grieving the loss of something so precious to them”.

Hokai Tahi service manager Katie van Dalen said baby loss is still a subject that is “swept under the rug” – and families’ pain can often be minimised, especially if the loss occurred early in pregnancy.

The care packs, she said, acknowledge their baby existed – even for a short time.

“People often say things like ‘oh, you can try again’, or ‘one in four pregnancies end in miscarriage,’” van Dalen said.

“But as soon as they find out they’re pregnant, so many people have hopes and dreams mapped out for their baby.

“A loss of a baby is a loss of those dreams – and that can have a huge impact.

“The packs are a way to tell our whanau, ‘hey, you’re special, what happened to you was significant, your child matters, and you’re still a parent’”.

“When you walk away from the hospital after a miscarriage, you have nothing. At that stage, you don’t have even have a picture from your scan to show you were carrying a baby,” she said.

“That sense of emptiness is so poignant.

“If I’d received a package like this, I think it would have brought me hope and comfort to know my baby was acknowledged.”

Hokai Tahi, based at Hessey House on Worksop Road, utilises a small team of volunteer support co-ordinators who “walk alongside women and whanau through all aspects of their pregnancy journey”.

All Hokai Tahi support co-ordinators are registered health professionals, such as nurses, social workers, and counsellors.

Martin, one of the founding members, said the service was created to address gaps in the maternal health sector – acknowledging that doctors often don’t have the time and resources to support people in a crisis pregnancy situation, or coping with baby loss.

“There’s so much to unpack – you’ve got a million thoughts running through your head,” Martin said.

“You’re anxious, unsure of what the future looks like, you might feel isolated, and you’re completely overwhelmed.

“And when you go to your GP, you’ve only got 15 minutes – and that’s not enough time to talk through it all.

“We wanted to create a service where people can sit down, have a cup of tea in a safe space, and receive professional, confidential, and non-judgemental support from people who genuinely care about their welfare.”

Hokai Tahi is reliant on community fundraising to deliver its services: including practical support during pregnancy, which can involve donating items such as maternity wear, petrol and grocery vouchers, baby clothes and nursery furniture to whanau in need.

People can also make donations towards the baby loss packs – which can fund self-care products, such as tissues, chocolate, teabags, hand lotions, tea light candles, and notebooks for journaling and reflection.

Van Dalen said parents have very much appreciated receiving the quilts – as it means they have something “homemade with love” that they can wrap their baby in before burial or include in their casket.

“Even if they didn’t get to hold their babies in their arms for very long, they are still very much loved,” she said.

“Acknowledging a loss helps people process their emotions and their grief – and that is so integral to the healing process.

“We know that losing a baby is so overwhelming – so people don’t have to open their pack right away. As long as they know it’s there when they’re ready, and that we care about what they’re going through.”